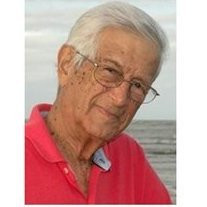 Victor P, Aloisio, Sr. 81, of Marietta, Georgia, died peacefully on November 13, 2013, with his family by his side. He is survived by his children, son Vic Aloisio, Jr. and his wife Carol of Suwanee, Georgia, daughter Cindy and her husband Jim Sims of Duluth, Georgia and daughter Allie and her husband Doug Albey of Buford, Georgia. Vic had five grandchildren, Katie Aloisio Honeycutt of Houston, Texas, Philip Aloisio of Suwanee, Georgia, Josh Albey of Buford, Georgia and Austin and Brandon Sims of Duluth, Georgia. He has two great granddaughters, Hannah Rose Honeycutt and Hailey Anne Honeycutt of Bellaire, Texas. He also leaves behind his companion, Ann Hartley of Atlanta, Georgia and his beloved dog, Teddy. Vic was born on May 8, 1932 at his parents' home in Brooklyn, NY. His parents were Italian immigrants and are listed on the wall at Ellis Island. His father, Vittorio Aloisio, delivered ice and coal by horse and wagon. His mom, Angelina, was a wonderful wife and mother. He remained in Brooklyn until he joined the United States Navy in the late 1940's as a teenager. He served aboard the aircraft carrier USS Tripoli. Before joining the Navy, he believed the subways of New York would take you anywhere in the world you needed to go. The Navy changed that idea when they put him on a train to Brunswick, Georgia and the naval base at Glynco. While stationed in Brunswick, he met the love of his life, Phyllis Watson. They were married in 1953 on January 18, 1953 at St. Williams Catholic Church on Saint Simons Island, Georgia and his life changed forever. They remained married for 57 years until her death in January of 2011. After leaving the Navy, Vic worked for the postal service while attending Southern Technical Institute, which was located where Peachtree-DeKalb Airport is now. After graduating from Southern Tech, he went to work for Aetna Insurance in Atlanta. At Aetna, his first job was working the map room marking the maps with all the risk Aetna would write. He stayed with Aetna until the early 1960's when he joined Haas & Dodd Insurance. In 1976, Vic joined forces with Bob and Charles Hamby to form what is now known as Hamby & Aloisio, Inc. where he remained for 37 years until his retirement in August of 2013. He was a leader within the company and is admired by his peers throughout the insurance industry. Earlier this year, Vic received the Lifetime Achievement Award from the Professional Insurance Agents Association. Vic was a member of Indian Hills Country Club and loved to play tennis and golf. During the 1980's he won the USTA Seniors Doubles National Championship in Little Rock, Arkansas. As the grandchildren came along, he passed his love of golf to each of them and played with them as often as possible. He always had a tip for you to make your game just a little bit better. He loved to spend time at his homes on St. Simons Island, Georgia and Hilton Head, South Carolina. His family has fond memories of these vacations and still returns many times each year. He was known for his outgoing personality. He truly never met a stranger. This attribute has served him well throughout his life. He was truly a wonderful dad, son, brother, husband, uncle, grandfather, great grandfather and most of all best friends to so many people. Vic had so many friends that loved him. He will be missed by so many people. Visitation will be from 4 pm to 7 pm on Sunday, November 17, 2013 at the Sandy Springs Chapel located at 136 Mt. Vernon Highway, Sandy Springs, Georgia. The funeral service will be held at 11 am on Monday, November 18, 2013 at Mount Bethel United Methodist Church located at 4385 Lower Roswell Rd, Marietta, Georgia. After the service, Vic will be buried alongside his wife Phyllis at a graveside service at Sunset Memorial Gardens on Indian Mound Road in Cartersville, Georgia. Memorial contributions are welcome and should be made in memory of Victor Aloisio, Sr. to Camp Sunshine, A Camp for Children with Cancer at 1850 Clairmont Road, Decatur, Georgia 30033 or online at mycampsunshine.com.

Victor P, Aloisio, Sr. 81, of Marietta, Georgia, died peacefully on November 13, 2013, with his family by his side. He is survived by his children, son Vic Aloisio, Jr. and his wife Carol of Suwanee, Georgia, daughter Cindy and her husband Jim... View Obituary & Service Information

The family of Victor Aloisio Sr. created this Life Tributes page to make it easy to share your memories.

Send flowers to the Aloisio family.