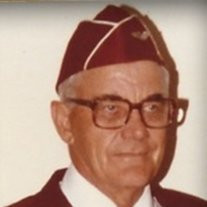 Robert W. "Bob" Whaley, age 89, Johnson City, Tennessee, passed away Friday evening, May 17, 2013, at the James H. Quillen VA Medical Center at Mountain Home, Tennessee. He was a native of Washington County, Tennessee, a son of the late Jacob and Fannie Dunn Whaley. Mr. Whaley was a proud United States Army Air Force Veteran and was a Prisoner of War during World War II. He entered the military February 19, 1943, assigned to the Army Air Force, took basic training at St. Petersburg, Florida for six weeks, and went to the Army Air Force Radio Operator and Mechanic School for six months at Scott Field, Illinois. Afterwards, attending the Army Air Force Aerial Gunnery School for six weeks in Laredo, Texas. After graduation, he was assigned to Bomber Crew as Tail Gunner on B17 heavy Bomber crew and took combat crew training at Norman, Oklahoma. He departed the United States on May 1, 1944. First to Oran, North Africa, arriving June 9, 1944. Second assignment was to Foggia, Italy and assigned to 301st Bomber Group-352 Bomber Squadron. He and his group went to Africa on the Liberty Ship Caleb Strong. His bomber was shot down on a raid on the Lobau Oil Refinery, Vienna, Austria on June 26, 1944. Immediately taken prisoner soon after they bailed out of the plane. He was in several different prison camps, some closely confined trips on railroad box cars plus a couple of long forced marches. In April of 1945, he was in a camp at Mooreburg, Germany where they were liberated on April 29, 1945 and flown to Camp Lucky Strike at LeHarve, France for processing and departed on May 17, 1945 to the United States. After arrival in the states, he was given a 90 day convalescent leave and then sent to Laredo, Texas where he was discharged October 30, 1945 after a long two years, eight months, and twenty two days. He was of the Baptist faith. He was a loving and devoted husband, dad and grandfather. He often joked that he had been captured twice in his lifetime, once by the enemy on June 26, 1944 and again by his wife on June 26, 1970. Other than parents, he was preceded in death by several brothers and sisters. Mr. Whaley is survived by his loving and devoted wife of 43 years, Betty M. Whaley, of the home; one son: Larry Whaley, Jonesbourgh, Tennessee; one step son: Bobby J. Cole and wife Teresa, Cartersville, Georgia; two step daughters: Pat Shepherd, Rockmart, Georgia and Karla Chasteen and husband Tyre, Cartersville, Georgia; twelve grandchildren; thirteen great-grandchildren; several nieces and nephews; special close friends: Gertha Laws, Doug and Angie Grissom, Dr. Vic and Linda Young, Chuck and P.K. Richardson, members of the Rolling Thunder- TN4 and members of the East Tennessee Chapter of the American Prisoners of War. Funeral service for Mr. Whaley will be held at 7:00 p.m. Monday, May 20, 2013, from the Unicoi Funeral Home Chapel. Reverend Dr. Vic Young will officiate. Mr. Chuck Richardson will provide the Eulogy. The family will receive friends prior to the funeral service between the hours of 5:00 p.m. and 7:00 p.m. Monday. The committal service will be held at 3:00 p.m. Wednesday, May 22, 2013, at Sunset Memory Gardens in Cartersville, Georgia. Cartersville American Legion Post will provide military last rites. The family will receive friends prior to the committal service between the hours of 2:00 p.m. and 3:00 p.m. Wednesday in the Sunset Memory Gardens Mausoleum Chapel.

The family of Robert Whaley created this Life Tributes page to make it easy to share your memories.

Send flowers to the Whaley family.