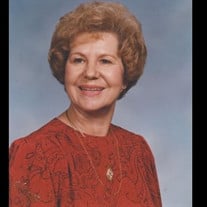 Mrs. Marie H. Steele, of White, Georgia, passed away Saturday, July 12, 2014. Services for Mrs. Steele will be held Wednesday July 16, 2014, at 1 o'clock, in the Rowland Springs Baptist Church in Cartersville, GA, with the Dr. Joe Ringwalt officiating. Mrs. Steele was born in Emanuel County, Swainsboro Georgia June 27, 1931. She attended grade schools in Swainsboro and Summertown. Mrs. Steele moved to Warner Robins in 1947, and her Junior and Senior she attended Warner Robins High School, where she graduated in 1948. Mrs. Steele entered in to holy matrimony with Jerrell W. Steele on March 3, 1951. Mrs. Steele was employed at various government installations during her career and she retired from Warner Robins Air Force Base in July of 1986, with 32 years of government service. She attended Sunday school and church at Rowland Springs Baptist Church where she was a member. Mrs. Steele was preceded in death by her husband of 58 years. Mrs. Steele is survived by three children, Carol Key of White, GA; Roy W. Steele of, Buchanan, GA; Ginger Wood of Dawsonville, GA, 13 Grandchildren, 16 Great Grandchildren, 3 sisters, and 1 brother. Family will receive friends on Tuesday, July 15, 2014 at Owen Funeral Home in Cartersville, GA from 6 to 8 o'clock and also from 11 to 1 o'clock at the Rowland Springs Baptist Church prior to the service.

The family of Marie H. Steele created this Life Tributes page to make it easy to share your memories.

Send flowers to the Steele family.