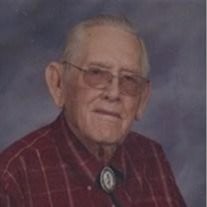 Mr. John Franklin Head, 91, of Cartersville, passed away Sunday, August 4, 2013. Born March 28, 1922 in Euharlee, he was the son of the late Clarence Sr. and Addie Grant Head. Mr. Head lived most of his life in Euharlee, where he was a cotton and produce farmer. He was later employed by Spring City Knitting in the maintenance department, where he retired in 1987. During World War II, Mr. Head served as Sergeant and squad leader in Company F 415th Infantry Regiment of the Timberwolf 104th Infantry Division. He sailed for Europe on August 27, 1944 and arrived in France on September 7, 1944. While in Europe, Mr. head served our country in combat in France, Belgium, Holland and Germany, which included the Rhine River, before returning to the United States on July 11, 1945. He received several medals and was awarded the Bronze Star. Mr. Head enjoyed playing guitar and he and several friends were members of a country band for many years. In earlier years, the band was broadcast on local radio shows and performed for many community events. In his later years, Mr. Head played guitar at several senior center and nursing home socials. He also enjoyed growing watermelons and cantaloupes, which he sold at the local farmer's market. He was of the Baptist faith and a member of Tabernacle Baptist Church. In addition to his parents, Mr. Head was preceded in death by his spouse of 60 years, Blanche Hornbuckle Head; two brothers, Claude Head and J.C. Head; a sister, Alease Robinson. He is survived by a daughter and son-in-law, Cheryl and Dennis Waits of Aragon; one brother, Clarence Head, Jr. of Stockbridge, and several nieces and nephews. Funeral services will be held Wednesday, August 7th, 2013 at 2:00 p.m. in the Chapel of Owen Funeral Home with Dr. Larry Davis officiating. Full Military honors will follow at Sunset Memory Gardens. The family will receive friends at the funeral home Tuesday evening from 6 until 8 p.m. at Owen Funeral Home.

Mr. John Franklin Head, 91, of Cartersville, passed away Sunday, August 4, 2013. Born March 28, 1922 in Euharlee, he was the son of the late Clarence Sr. and Addie Grant Head. Mr. Head lived most of his life in Euharlee, where he was a cotton... View Obituary & Service Information

The family of John Franklin Head created this Life Tributes page to make it easy to share your memories.

Send flowers to the Head family.