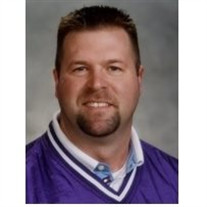 Mr. Jeffery Patrick Cave, 45, of Cartersville, died Tuesday, April 22, 2014 at Wellstar Kennestone Hospital. Jeff was a member of Friendship Baptist Church, and his favorite past-time was spending time with his three children and their dog, Jack. He enjoyed all professional and intercollegiate sports, weightlifting, martial arts, UFC training and fights, and collecting sports print memorabilia. Jeff attended Darlington School in Rome and was a 1986 graduate of Sprayberry High School in Marietta. He earned Bachelor Degrees in political science and pre-law from Kennesaw State University in 1999, and a Master’s Degree in political science in 2010 from American Military University in Manassas, Virginia. Since 2005, Jeff worked as a Coach and Teacher at Cartersville High School, serving as a Behavior Specialist, History and Government Teacher, Coach of the Varsity Wrestling Team, Coach of the 9th Grade Football Team, and Assistant Coach of the Varsity Football Team. Before answering his calling to teach and coach, Jeff worked as a financial Advisor, and licensed stockbroker and insurance agent for Morgan Stanley Dean Witter and SunTrust Bank from 2003 to 2005. From 2002 to 2003 he was employed as a Special Agent for the United States Drug Enforcement Agency. In the late 1990’s, Jeff served as the Director of Public Relations and the Assistant General Manager of the Atlanta Eagles U.S. Basketball League. He served an internship with Turner Broadcasting, CNN Sports from 1990-1991 and from 1989 to 1991; Jeff was a contributing journalist and editor for the Atlanta Braves, the Atlanta Attack, National Professional Soccer League Team, the Atlanta Lawn and Tennis Association – Net News in Dunwoody, and Footnotes Magazine. Survivors include his children, Lucille Elizabeth Cave, Olivia Ann Cave, and Joseph Patrick Cave, all of Cartersville; his mother and step-father, Sherry Teems Berry and John Ledbetter of Cartersville; father, Terry Patrick Cave of Acworth; siblings, Elizabeth Berry Babb and her husband Jeremiah of Marietta, Justin Cave of Acworth, and Jason Cave and his wife Crystal of Red Top Mountain; grandparents, Betty Wood Bevels of Cartersville, and Sarah Terry Cave of Rome; special friend and partner, Karis Kadum Morneau of Cartersville; nephews, Kingston Babb, and Archer Babb, both of Marietta; niece, Faith Cave of Red Top Mountain; and his best friend and buddy, his dog, Jack Daniels Cave. A memorial service will be held on Saturday, April 26, 2014 at 11:00 a.m. at the Cartersville First Baptist Church with The Reverend Drew Startup officiating. Interment will be private. The family will receive friends on Friday, April 25, 2014 from 6 until 8:00 p.m. at Parnick Jennings Funeral Home. The family suggests that those who wish may make donations to the Cartersville High School Wrestling Program, 320 East Church Street, Cartersville, Georgia 30120, in memory of Jeff.

Mr. Jeffery Patrick Cave, 45, of Cartersville, died Tuesday, April 22, 2014 at Wellstar Kennestone Hospital. Jeff was a member of Friendship Baptist Church, and his favorite past-time was spending time with his three children and their dog,... View Obituary & Service Information

The family of Jeffery Patrick Cave created this Life Tributes page to make it easy to share your memories.

Send flowers to the Cave family.