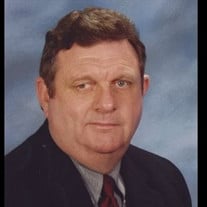 Gary Gibbs, 72, of Cartersville, Georgia, passed away Tuesday, July 1, 2014. Mr. Gibbs was born October 6, 1941, in Sylva, North Carolina, the son of Irene Clarice (Hightower) Gibbs and the late, Himan Hayes (Red) Gibbs. He was an engineer with the Georgia Department of Transportation, was a graduate of Cartersville High School Class of 1961, was an antique car enthusiast, enjoyed spending time with family and friends and was a member of Tabernacle Baptist Church. He was preceded in death by his father, Himan Hayes (Red) Gibbs. Surviving is his wife of 51 years, Claudia (Bagwell) Gibbs of Cartersville, two sons and daughters in law, Matthew and Kathy Gibbs of Warner Robbins, Stephen and Chasity Gibbs of Cartersville, grandchildren, Makaylie, Cameron, Mary Beth, Daniel and Aaron, his mother, Irene Gibbs of Cartersville, brother, Danny Gibbs and his wife, Jayne of Cartersville, a sister and her husband, Lynn and Donald Abernathy of Adairsville, nephews, Tripp Abernathy and his wife Katelyn and Thomas Abernathy. Funeral services will be held Thursday, July 3, 2014 at 2:00 p.m. at Tabernacle Baptist Church with Rev. Richard Brown officiating. Burial will follow In Sunset Memory Gardens. The family will receive friends at the funeral home Wednesday evening from 6:00-8:00 p.m. Pallbearers will be Jerry Milam, Johnny Womack, Scott Templeton, Neal Davies, Troy Tomlinson and Ronnie Trucks. Honorary pallbearers will be member of the Coachman Car Club. In lieu of flowers, contributions may be made to the Bread of Life Ministry or Tabernacle Baptist Church.

The family of Gary Gibbs created this Life Tributes page to make it easy to share your memories.

Send flowers to the Gibbs family.