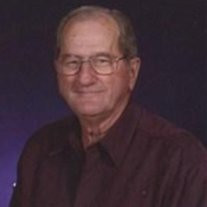 Doyle Sheffield, 78, of White, Georgia, died Monday, September 9, 2013. Mr. Sheffield was born August 2, 1935 in Calhoun, Louisiana, a son of the late John and Eleanor McDonald Sheffield. A resident of Cartersville since 1968, he was a member... View Obituary & Service Information

The family of Doyle Sheffield created this Life Tributes page to make it easy to share your memories.

Send flowers to the Sheffield family.