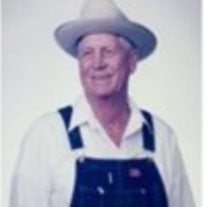 Mr. Danial “Boone” Vernon, age 80, of Cartersville, died Saturday, March 15, 2014 at Cartersville Medical Center. Born January 9, 1934 in Waleska, Georgia he was the son of the late Chesley Vernon and the late Stella Pearl McCoy Vernon. In addition to his parents he was preceded in death by his wife, Sonja Ann Vernon; his grandson, Zegan Mills; his sister, Edna Alred; and his brothers, Earl and Billy Joe Vernon. Mr. Vernon was an avid outdoorsman. He loved to hunt, fish, and collect honey from his beekeeping . He also loved to hunt snakes and was involved in the “Rattle Snake Roundup” held annually. He was known by all to have a great sense of humor. Survivors include his daughter, Darlene Henson and her husband Tim of Cartersville; his sons, Doug Vernon and his wife Toni Jane, Westley Vernon and his wife Linda of Cartersville; his grandchildren, Danial Vernon, Megan Vernon and Cali Pharis and her husband Jeremy; his great- granddaughter, Paisley Pharis; his brother, A.V. Vernon of Villa Rica, several special nieces and nephews, and Pat Crockford of Cartersville, who was just like a daughter. Funeral services will be held on Wednesday, March 19, 2014 at 11:00 a.m. in the chapel of Parnick Jennings Funeral Home with The Reverend Doug Vernon and the Reverend B.J. Piatt officiating. Interment will follow in Sunset Memory Gardens, Cartersville. The family will receive friends on Tuesday, March 18, 2014 from 6:00 to 8:00 p.m. at the funeral home. Serving as pallbearers will be, Mickey Reed, John Cagle, Mike Allen, Marlon Haney, Wilford Hamby, and Charles McGill. Harold Roland will serve as an honorary pallbearer.

The family of Danial "Boone" Vernon created this Life Tributes page to make it easy to share your memories.

Send flowers to the Vernon family.